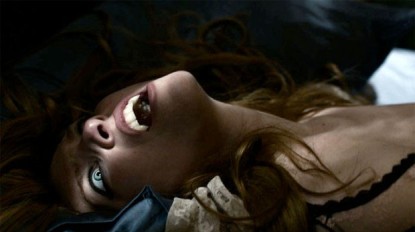 Her Love Will Never Die.

If director Xan Cassavettes name sounds familiar to you it’s not a surprise, as she is in fact that daughter of legendary independent filmmaker John Cassavettes (Faces, The Killing of a Chinese Bookie).  This film however is Xan own mark on the independent scene, and from a stylistic standpoint it’s good to see she has some of her fathers traits.  Kiss of the Damned is a super sexy, bleak, oblivious vampire flick that plays out more like an adult version of Twilight than say, Dracula.  Though comparing this film in anyway to Twilight is an insult, the films do share some similar themes, of drama, love, and vampires who struggle to fit in by feeding on animals.

The best thing I can say about this movie is that it evokes a certain feel that I haven’t come across in quite some time.  There is a certain nostalgic aura that surrounds the film and I’m not entirely sure why.  It’s set in present day, and it in no way tries to be a throw back to classic horror it ends up doing so, I’m not sure if Cassavettes wanted to achieve this feeling or not, but my gut tells me it was a happy accident.  It’s one of those movies that you’d pick up at your local video store (back in the day of course) that had a fifty percent chance of being good, and a fifty percent chance of being a complete waste of five bucks.  It offers the slow burn of a late seventies horror film, the age when horror was taken seriously whether the movie deserved to be or not, with a slight bit of 1980’s in the way of characters and setting.

The film follows Paolo, a screenwriter who recently moved out of the clutches of Hollywood to work on his next big screenplay.  Though it does not take long before he is distracted by a beautiful woman named Djuna who he runs into at a video store while having a night out, and immediately becomes infuated with her.  At first she doesn’t want anything to do with him – well she does, but she tells him that it would never work because she has a “blood disorder” in which she cannot go into sunlight.  He is persistent, and drives to her mansion home in an attempt to change her mind.  It’s than that she tells him the truth – that she is in fact a vampire and they cannot be together.

After an intense sex scene, and Djuno giving into her natural desires turning Paolo into a creature of the undead she spends the remainder of her time teaching him the ways in which he must live in secret.  Their relationship builds and just when it appears as though they will have the perfect little life together living for eternity Mimi enters.  Djuno’s sister who is much more rebellious, and doesn’t really believe in the whole not killing humans part of the happy couples lifestyle.  This is when the film picks up, and turns from a romantic vampire tale into something a little more sinister and fun, as Mimi sends the lovers (as well as other local vampires) into a world of destruction.

Kiss of the Damned is not a thrill ride movie with sequence after sequence of spectacular events.  As I said before the movie is a bit of a slow burn which is both a good thing and bad.  It takes itself very serious, it’s not as smart as it thinks it is, nor is it in anyway scary or gory, it is however soaked in an a eerie atmosphere giving off a constant feeling that something isn’t right.  The music and sound design are spectacular, and the cinematography ends up being hauntingly beautiful in a neo gothic sort of way.

It’s one of those movies that when I was younger, me and a friend would rent hoping to see some skin, rewinding the sex scenes and being amazed (like twelve year old boys are) that we are seeing this sort of sex in a movie.  If you enjoy vampires movies, or are a twelve year old looking to see some skin and aggressive sex than it’s worth checking out as I had more fun with it than I expected to.